As October winds down and November begins my thoughts begin to drift towards the late archery season here in Oregon and huge redband trout gorging behind spawning fall chinook salmon. This year I was fortunate enough to fill my deer tag so chasing blacktail deer is out of the question (maybe a cow elk).  I have been drawn to thoughts of the huge pig redband trout of the Deschutes River. No other time of year allows consistent action for large (very large) redband trout like the chinook spawn in fall.  Most anglers target steelhead during this time of year so the trout do not get the pressure. Concentrations of spawning chinook draw in the trout to feast on eggs and all the insects that get kicked up by the commotion.  It only takes a few chinook to draw in the trout. Herds draw in the true pigs. 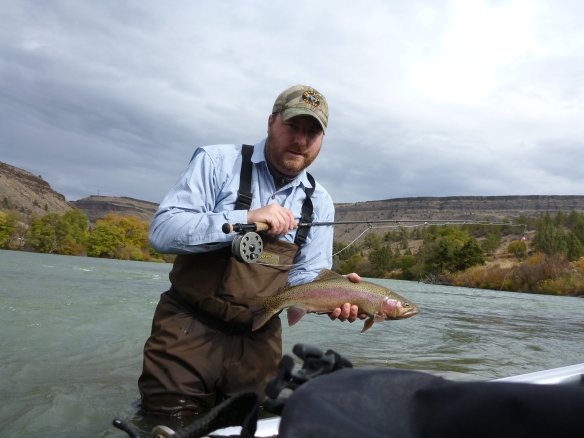 In mid-October a strong frontal system produced some pounding rainfall on the glaciers of Mt. Jefferson and Mt. Hood.  The glacial silt runoff turned the river an Alaskan grey with visibilities of less than a foot that remained for over two weeks.  The fish faired fine.  I think the increase in river level and the color drew a huge push of chinook upstream.  I tried my luck in a few of my usual haunts and egged up this sporty fella behind a group of spawners I located in the glacial tinge.  It is the usual “Turb self-photo” hence the dry bag and buckle in the foreground.  Self photos just add to the adventure. 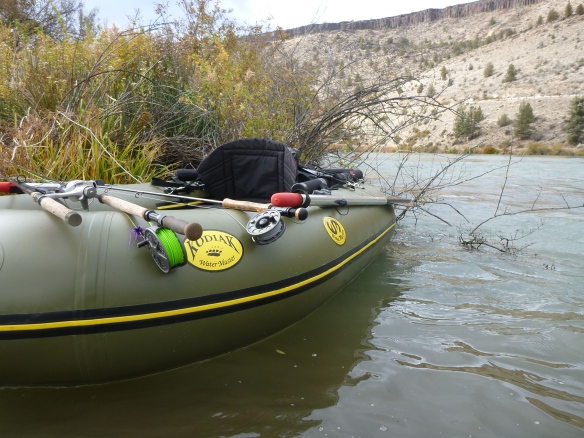 My stealth floater and arsenal

Of course none of this would be possible without my Watermaster Kodiak.  This boat allows me to sneak into the tightest spots and tie up to twigs where drift boats would spook the whole herd.  You have to watch the rods because there are a thousand ways to snag a 13 foot spey rod in the brush along the bank.  I hope I do not learn the hard way. My advice: break the rods down, secure them with rubber bands, then lash them to the boat.  It may create a few interesting tangles from time to time, and slow down the fishing, but you won’t end up with a six piece spey rod, or worse a six piece spey rod and a five piece single-hander.

No words can explain the action or the size of the pig trout that suck up behind these groups of chinook.  A few photos is the best I can do to explain the quality. 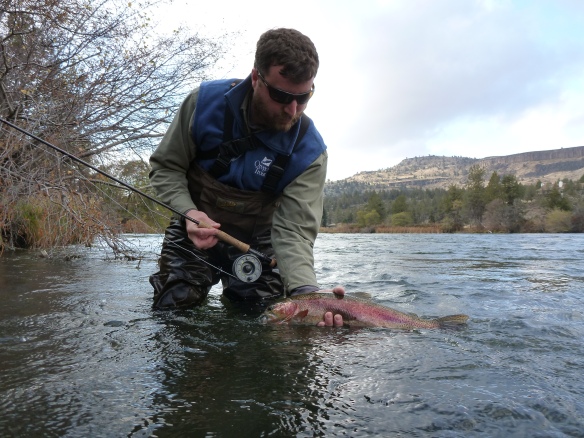 Above average, but common 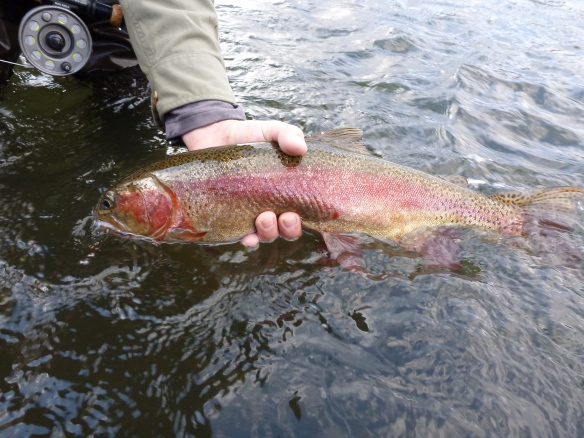 A closer look at this old pig trout 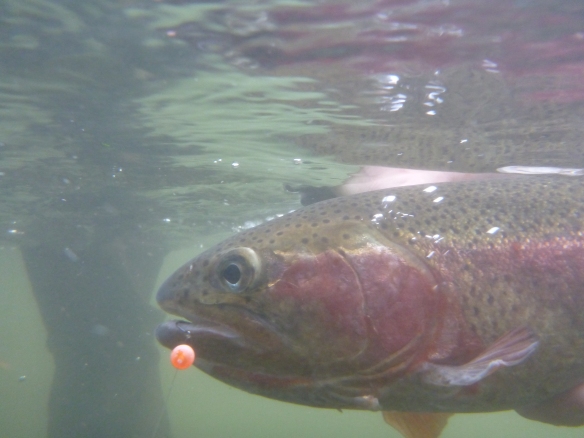 The release with a peek at a custom egg pattern

Since the chinook are present in numbers the occasional dorsal or tail hook up threatens to take your rig- or worse, splinter your rod.  My advice is to snap your line with the rod pointed right at them.  If you use maxima, half the time it pulls out of the soft flesh.

Every so often they develop a hunger for the egg.  If that happens there is usually a battle.  My advice: play to win! 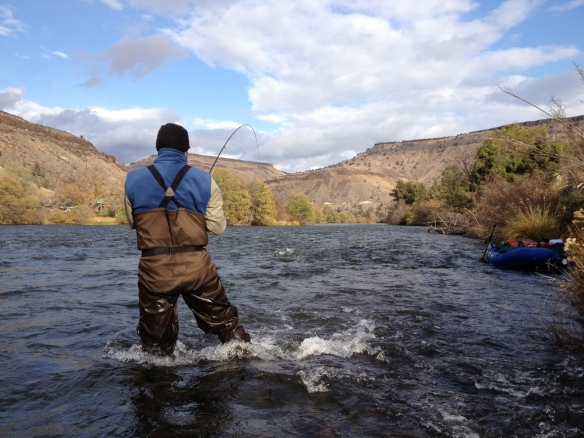 The battle. Keep the rod up!! 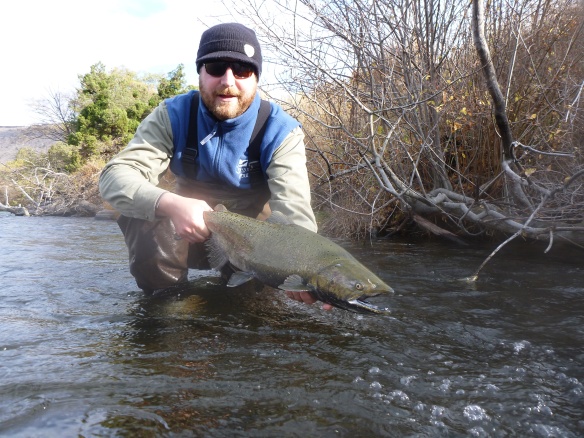 I rarely take people to my go-to spots.  Other people rarely take me to their go-to spots.  It does happen.  Appreciate it when it does.  This time I chose to share the spots and the knowledge of how to rig up for these pig trout slobs.  The river gods responded with a gift of their own.

Sir slobness (not the angler) made an appearance.  Truly the biggest redband I have handled to date.  Bigger trout exist, many in our dreams.  This one is a pig trout for sure. 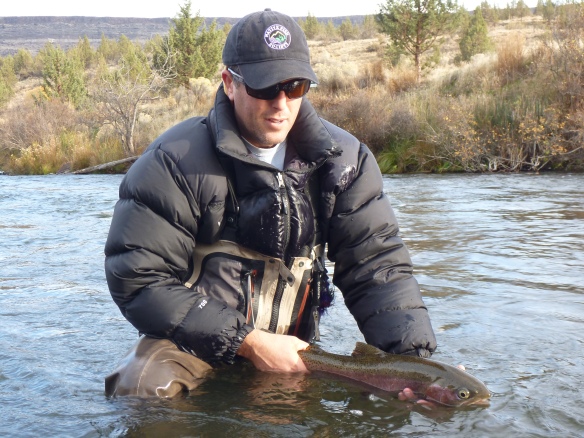 Please handle with care and release wild fish to keep the dream alive. 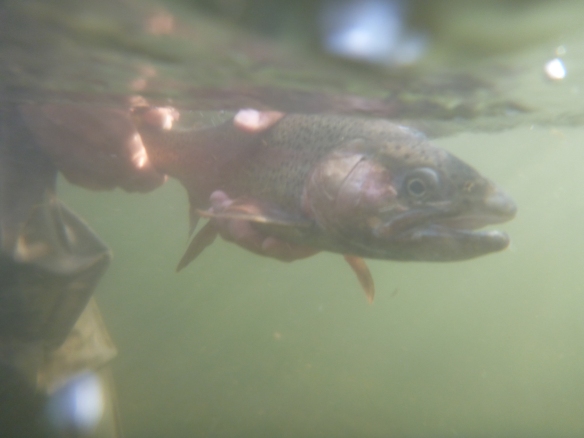 Stonefly hatches are in full swarm on the Deschutes River in Oregon.

Grab your chubby and try your luck.

If fished enough, any fly will catch them when the trout are stupid on the big bugs.  However the chubby does out perform according to my records.  Everyone has their twist or adjustment to the stock chubby.  I have mine, its natural.  Get your markers and best foam scissors.  Cuz you won’t need um.  Other than a slight touch up on the body and wing of stock chubbys with a permanent marker; I rarely modify my chubby.  You can trim the wing a bit to get it sized to please.  The fly is offered in size 6-12 in a variety of styles.

I have added an additional twist or tactic to fishing the chubby I will respectively call  the Bob and Chubby.

Some of the finer details of this technique will be revealed in this post.  They will change how the Deschutes River is fished forever.  So I am hesitant to divulge. 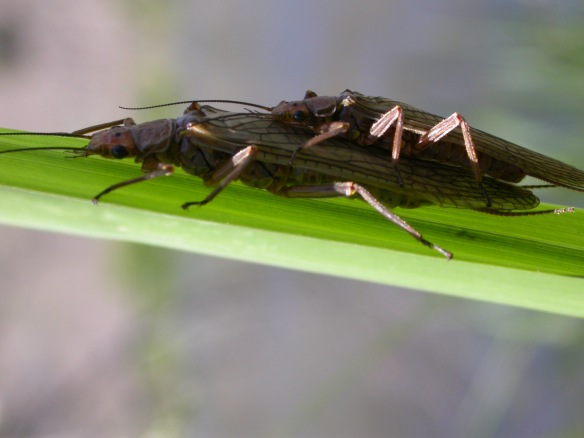 The Bob and Chubby brings it to the next level.  Not everyone is ready for it though.  There is no turning back! 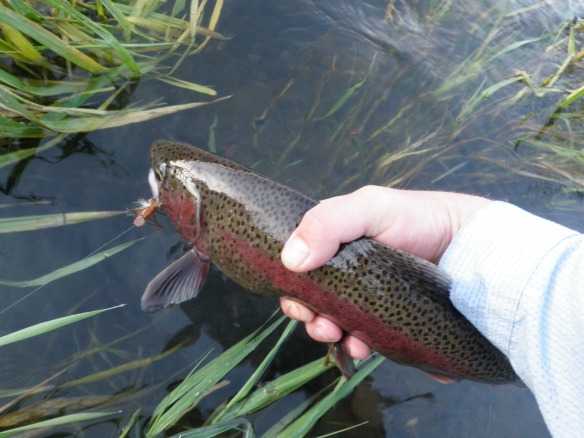 I just like to fish. Period
The Bob and Chubby extend my ability to fish. Period
I can’t claim that I invented the technique.  I can claim that I revived it using a modern celebrity fly.  I do not see a lot of folks out there fishing the large bug hatches using this technique.  I feel like a pioneer.  I am slightly afraid of the response and the potential for new recruits.
The dissenters should not be put out and leave nasty comments.  Rather they should feel rejoiced to know that I will not be fishing their chosen water, but rather the knarly stuff where the slobs live with all the brush and cover.  I give the buggy whippers a wide berth this time of year.
Many have experienced the splendor of the Deschutes Canyon in spring.  There is not much better.  The fever and fury of the salmon fly hatch and the following that it brings can easily itch at anyone’s love-hate tendencies. 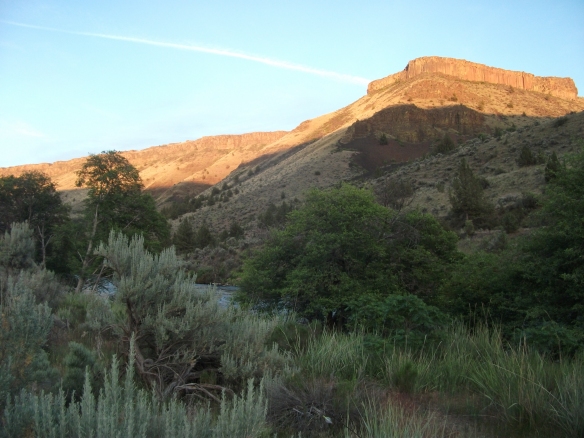 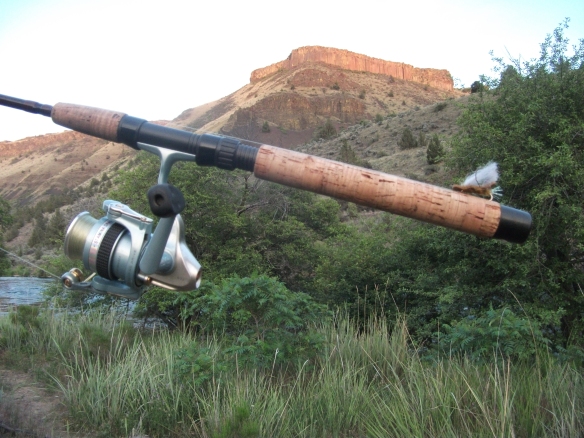 How you ask?  Oh the secrets.  On the Bob of course.  Bob and Chubby. 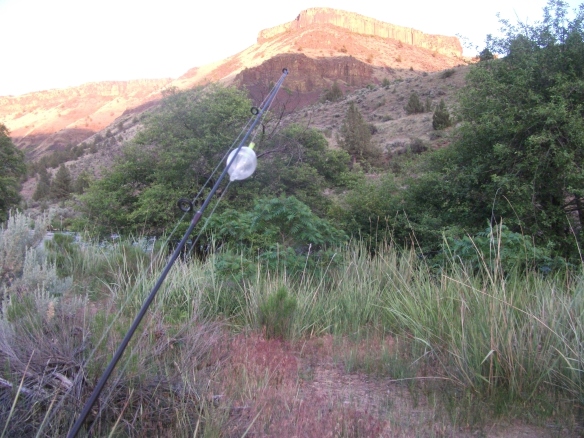 I swear this technique is in one of Outdoor Life’s 100 Best Fishing and Hunting Tips articles.  That is my kind of thing.  Old school all the way.  You can tech it out with a dropper or upgrade to a custom leader.  I usually just huck it!  On mainline 4-6lb Pline.  Braid floats so I have toyed with and braid mainline and mono leader.

Using proven subsurface jig and Bob techniques for steelhead on the same river.  I have grown confident in the Bob combos. I have been fishing like this for years, or should say experimenting with fishing and re-fishing my trout spots with spinning gear.  The Deschutes brought forth an interesting situation.  Big water, lots of bank cover, lots of bugs, and lots of trout.  I quickly revisited the Bob combos and eventually stumbled onto the chubby. 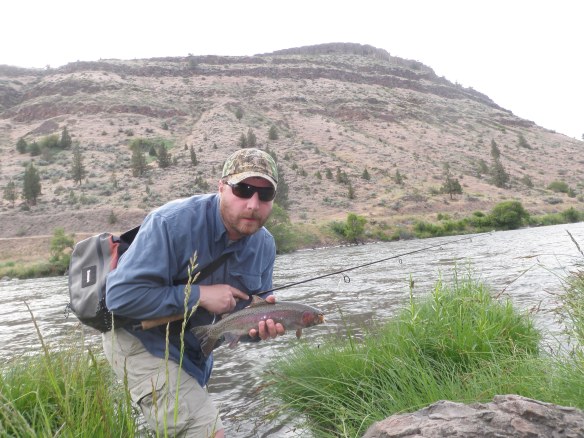 I had the pleasure to fish with an old friend during the bug frenzy.  Russ Mitchel former junior varsity All Pro center for the Redmond State Sasquatch knows his way around the trout scene on the Deschutes.  He has done some fishing over the past few years and knows his way around the flotant bottle as well.  He was a quick convert to the Bob and Chubby in the warm afternoon gusts.  “We wouldn’t be fishing in the wind right now”  I blurted.  “The Bob and Chubby keep you fishing longer in the wind”  “Agreed!”  Russ replied.

Strikes are violent and hook ups about 50% over the long haul.   Lots of action is the key.  I had two solid takes from nice fish at the boat ramp hole at 12 noon.  Two slobs right off the bat would have put me ahead and in running for the trophy and prize purse for the days competition.

The Bob and Chubby opens up a lot more of the river.  Russ is firm believer. 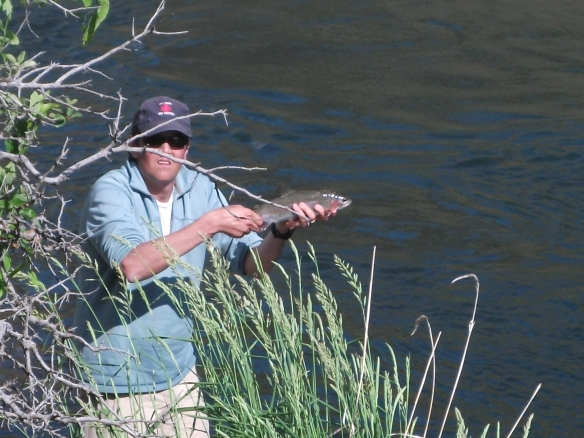 Every year I tell myself I will get out for the salmon fly hatch a little early this season and fish a bit lower down like Mack’s or something.  I never seem to.  Next year I guess.  Bob and Chubby love to travel.

I just want to fish.  Period 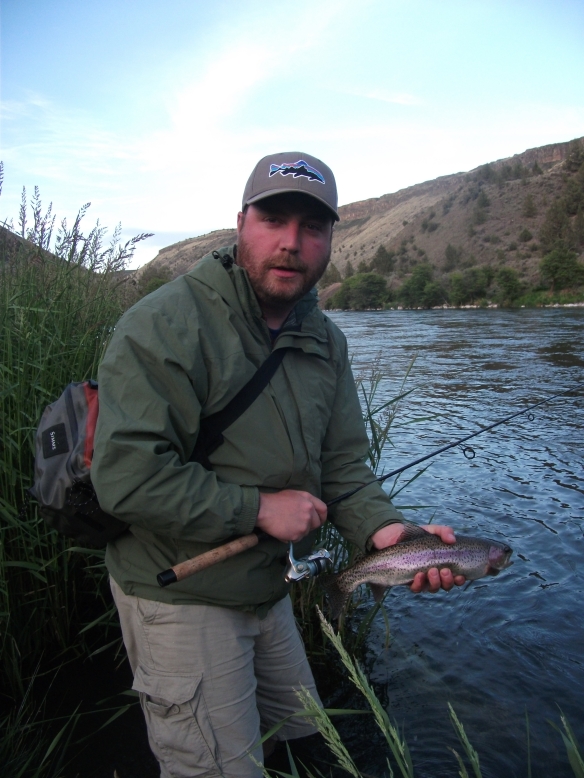 Living the good life – Self guided

I went on a short float today on the Deschutes River from the re-regulating dam downstream to the boat ramp at Warm Springs.  I hoped to catch a few steelhead, but the redbands were stacked in the riffles like cord wood feeding on eggs behind spawning chinook.  I could not pass by without giving my reel a workout.

Fishing was fast and furious right from the start.   I used my standard fall rig, a weighted size 2 black stonefly nymph with a bead egg dropper.  Some of the biggest redbands I tangled with were sucked up right behind groups of Chinook actively digging redds in the knee-deep water.  The current wast fast so the takes were quick with the indicator racing upstream.  After a strip hook-set most fish made a strong downstream run.  Some went to the air to show their prowess while others just peeled line.  After losing the first four fish in less than 20 minutes I realized I better not horse them on my 8lb maxima ultragreen tippet and 6lb ultragreen dropper. 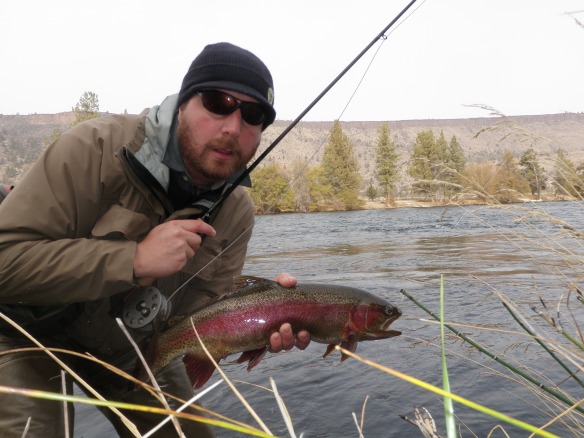 It was cool to fish Alaska style in Oregon behind spawning salmon.  All the of the fish I landed were plump and sporty, peeling line and requiring me to head back to the shelter of the bank water to land them.  This fishing was good enough for me to limit this trip to a solo mission to catch them all for myself.  The self photos using my Joby tripod will help preserve the memories of the blistering battles with these wild pig trout of the Deschutes. 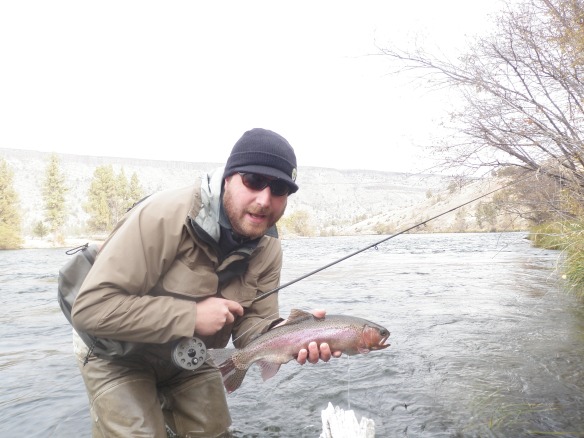 I will be the frist to admit the Deschutes River has no secret spots and gets pounded by fisherman daily.  For many years I went home frustrated and fishless.  I have lived only 15 minutes from this treasured river for seven years now and have made the decision to figure it out.  Well I can’t say that I am a Deschutes expert.  I do feel if I can pick my day and work the water I can usually bury my hook into something beside the bank side brush.

Steelhead are in the river from the dam to the mouth (100 miles) and I have brought more than one to the bank this season.  I plan to probe my favorite runs at least one more time before the late archery season opens and my thoughts focus on rutting blacktails in the Cascades.